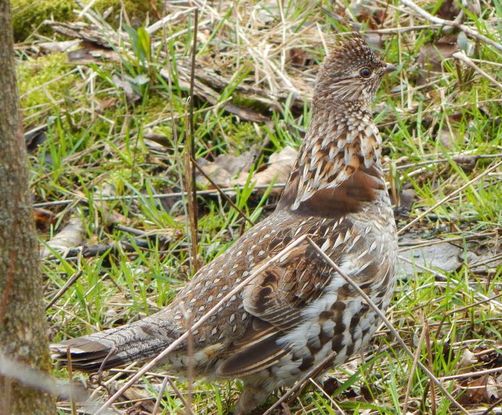 Gray morph male (Click to enlarge)
Description: A mid sized, chicken-like bird with an excellent cryptic pattern to its plumage. The crest atop the bird's head can be raised or lowered. Ruffed grouse come in two different color forms, the red morph and the gray morph, gray tends to be more frequent in our area. They are easily distinguishable by the tail color, rufous or gray accordingly. Male birds have a solid dark tail band, whereas females have an band saturated with other tail colors.
​
Nest: A depression in the leaf litter on the forest floor. Nest is usually under a fallen branch or near the base of a rock, tree, or shrub. Often, incubating females will not flush from the nest until the intruder nearly steps upon it.

Eggs: 9-13 creamy-tan eggs with  faint brown markings and washes. Chicks are able to walk and forage soon after hatching and leave the nest immediately.
​
Diet: Largely herbivorous, ruffed grouse eat buds, fruits, leaves and insects. In winter their diet is comprised greatly of buds and twig tips from deciduous trees such as aspens, black cherry, apple trees and willows.

Habitat: Deciduous forests, mixed forests and forest edges. They seem to prefer younger forests with a lower story of briers, shrubs and saplings. They are quick to take off and disappear deeper into the forest in a loud flurry of wings.

Notes: Male ruffed grouse use their wings to make a noise reminiscent of a distant lawnmower starting up. They use this "drumming", as it is termed, to defend their territory or attract a mate. Usually the bird uses the same rock or log to display from day after day. During the display, feathers at the neck rise making the "ruff" and the tail spreads like that of a wild turkey. In the winter, they burrow into the snow to roost and will seem to explode out of nowhere upon close approach. 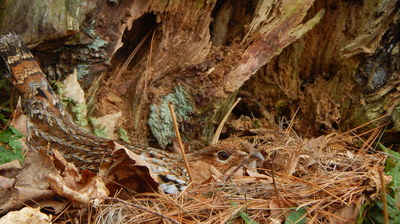 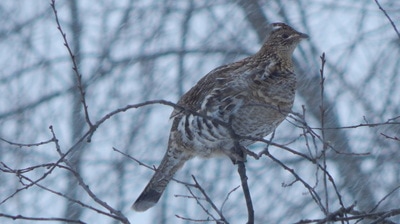 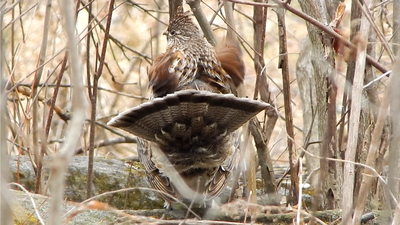 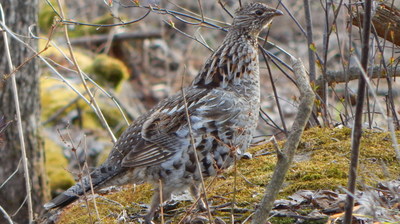 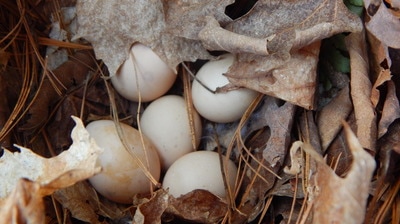 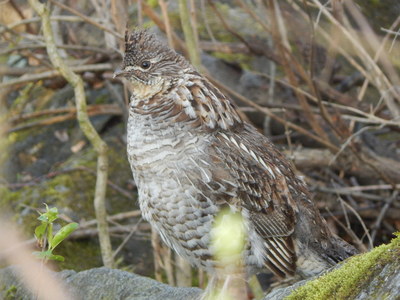