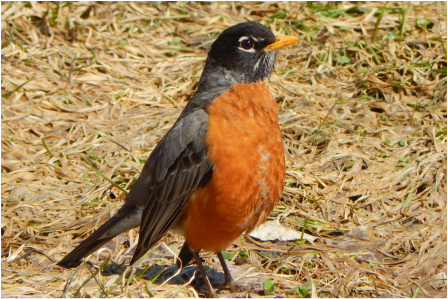 Nest: Base is constructed of leaves, coarse grass, weed stems, twigs, string, moss, and mud. The cup is shaped with more mud, grasses, and some weed stems. Nest is lined with fine grass. Robins seem to have an affinity for fibers from tarps. When available, many nests contain them. I have found the majority of a grocery bag, a rubber band and wire used in different nests. Urban robins tend to utilize more of these human sourced materials than traditional forest birds due to the availability of such materials.
​
Ledges such as beams, gutters, windowsills, under porches, and platforms are common choices for nest placement. They will sometimes place materials or partially constructed nests along the beam on which they are nesting. Also tangles of vines, forks in trees especially conifers, apple, maple and hawthorn, and sometimes bushes such as honeysuckle and nanny berry. I once found a nest on the wheel of a seldom used truck. Of 23 nests in a breeding season: 1 in butternut, 1 in Buckthorn, 3 in apple trees, 2 were in hawthorn, 5 were in maple, 1 in white pine, 2 in ash, 1 in elm, and 7 in unnatural locations (2 in ornamental conifers, lilac bush, domestic fruit tree, in a gutter, under deck, inside a barn). Nest height is highly variable although most will be in the 15-25 ft range.

Robins may reuse a nest they built in the same season if the first brood was successful. They refurbish the nest by adding a new layer of mud and grass and a fresh lining. Robins aggressively chase nest predators such as Common Grackles and Blue Jays and mob hawks and owls with groups of other birds. Female robins choose nesting sites by flying to different branching areas on trees in their territories and test these locations, acting as if they were sitting in their nest. When the spot that conformed to the female's body the best is found she will start to construct the nest.
​
​Robins will often start nesting in April when no leaves are on the trees yet, many of these nests fail due to the lack of foliage cover.  Some are only a few feet off the ground while others are high in the treetops. Earlier season nests tend to be lower while later ones are high in the branches of deciduous trees. Nest shape varies with location and time of year. When mud is more available in spring, nests are deeper and better formed. This also occurs when nests are built on level surfaces such as beams. Summer nests are shallower owed to the dryer soil.

Eggs: They usually have two broods, rarely three each nesting season.  3-5 light, bluish green eggs (robin's egg blue) per brood, most frequently 3 or 4 eggs. Usually nests that have two or one egg are re-nests of a brood that failed before all eggs were laid.

Habitat: Open woodlands, lawns, parks, pastures, golf courses and urban areas. They have adapted very successfully to urban areas. In fall, robins gather in large flocks and travel south, many flocks descend on an area and forage for a few days before moving on. They stay in flocks until they arrive in spring and spread out to breed. Some robins stay over the winter. These individuals are often males and feed on fruit; at this time they are highly nomadic and often form flocks. I've seen them following a flock of starlings to feeding areas in winter.

Diet: Mainly composed of insects in spring and summer supplemented with fruits. Fruit is consumed most in winter and fall. Some in spring when ground is covered by snow or frozen. Invertebrate prey includes earthworms, grubs, caterpillars, ants, beetles and moths. They flip leaves and dead grass to expose insects and other invertebrates. They also scavenge dead or dying worms from roads and driveways. When a hairy caterpillar is found it is beaten against the ground or a perch to remove some of the bristles. They will occasionally take small animals such as frogs. When foraging they appear to be listening although they actually are getting a better look due to the positioning of their eyes on the sides of their head. Robins eat fruits such as chokecherries, sumac, various ornamental fruits, crab-apples, Virginia Creeper, honeysuckle, wild grapes, blueberries and dogwood berries. Less frequently eaten is the fruit of Buckthorn, usually a final choice when other food is scarce. Nestlings are fed primarily insect larvae, beetles, and earthworms, fruit, and small vertebrates such as young frogs. I once watched a pair of robins bring seven young Leopard frogs to their young over the course of a few hours during a period of amphibian abundance. 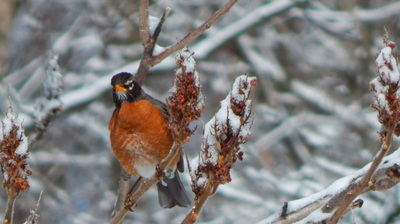 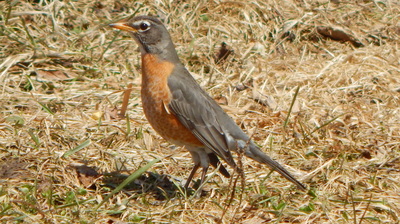 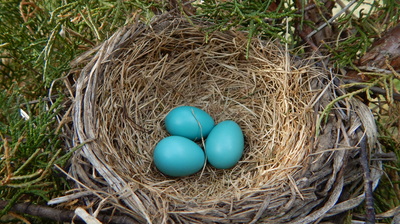 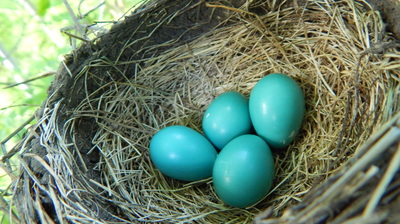 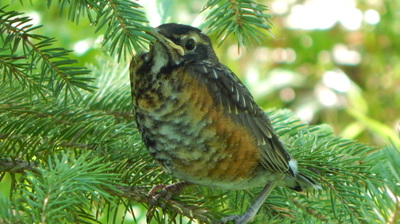 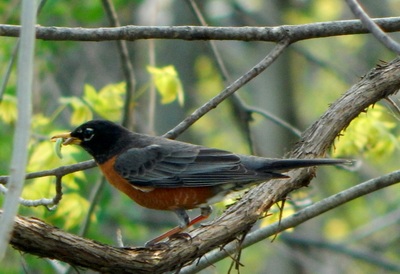 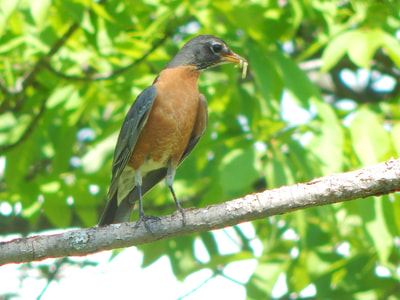 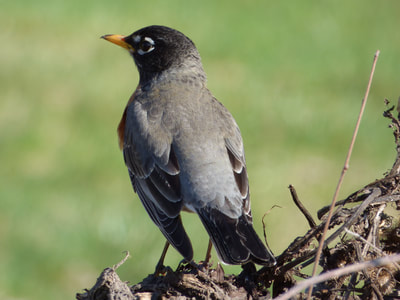 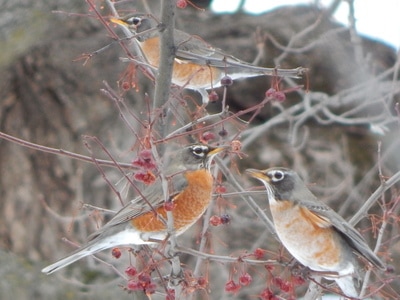 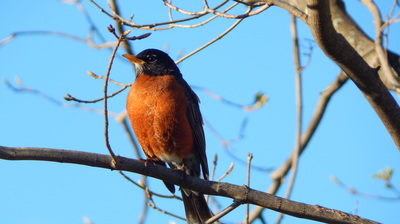 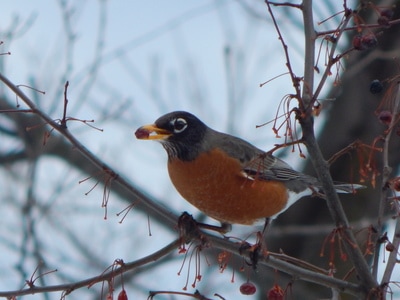 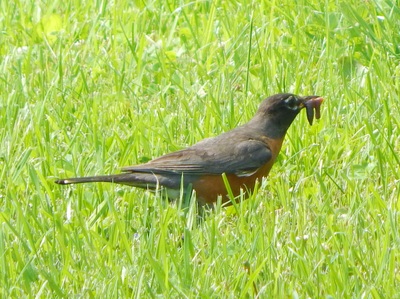 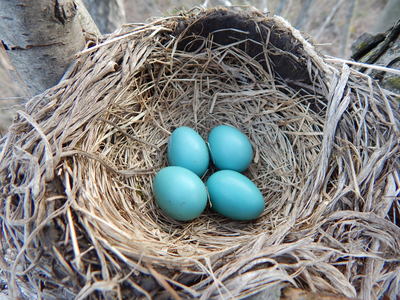 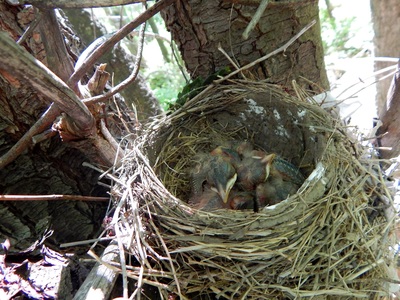 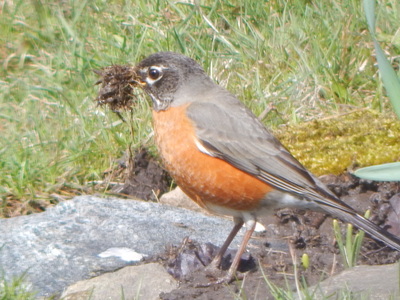 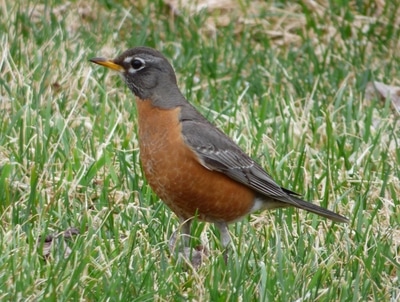 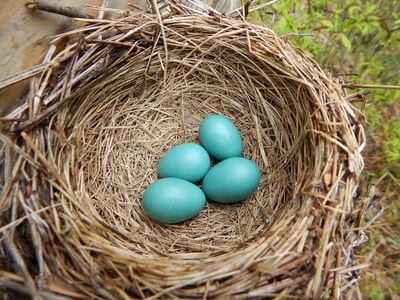 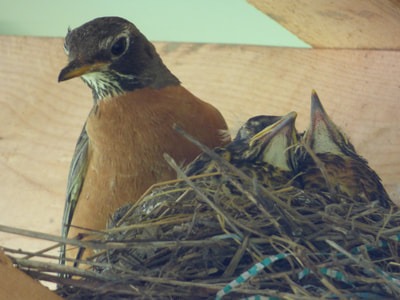