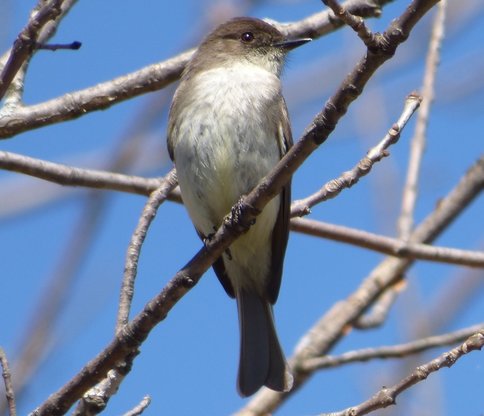 Eastern Phoebe
Description: Brown wings, head, back and tail. Underparts are white to olive. Dark bill and legs. Sexes are similar although the female is slightly larger than the male. The characteristic tail flicking especially upon landing can help identify this species.

Nest: Cup of moss, grass, plant fibers and synthetic materials that are held together and attached to surfaces with mud pellets. Lined with fine grass, inner bark of grapevine, fibers of weed stems, hair, plant down and small feathers. Sometimes insulation and similar fibrous materials are used. Baler twine, tinsel, tarp and rug fibers, and shredded string frequently in nests. On or attached to a building, beam, eave, bridge, or light fixture. Sometimes a delay between completion of nest and laying of eggs occurs.

Diet: Hunts by sitting on a perch then swooping in to catch insects flying nearby. Also gleans insects off of foliage and eats fruit. Insects such as flies, moths, grasshoppers, butterflies, dragonflies, beetles and wasps are most commonly taken.

Habitat: Field edges, swamps, barnyards, lawns and streams. Often found near water, phoebes have accustomed well to urban areas. The earliest flycatcher to arrive in the spring, often in late march. They can be very messy, dropping feces all over beneath the nest and beneath favored perches. 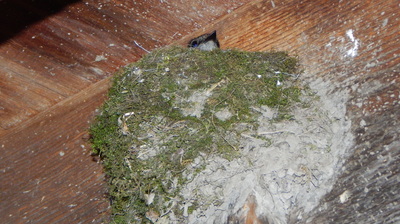 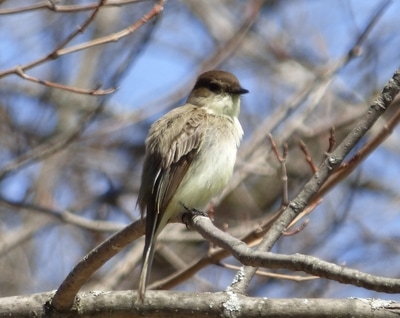 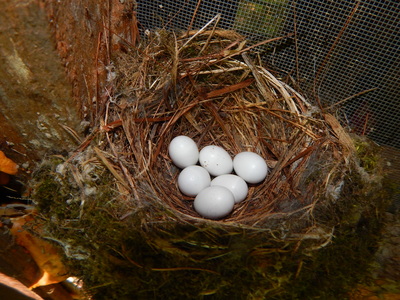