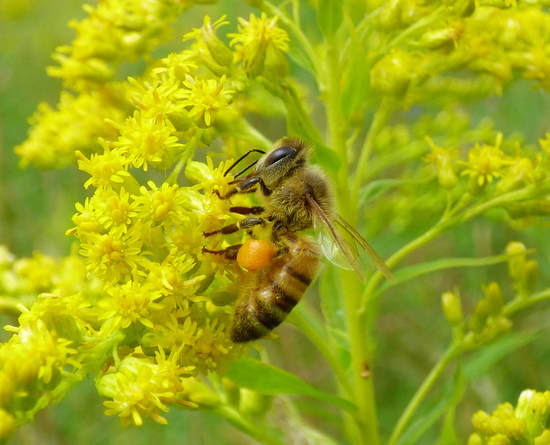 Nest: Usually colonies live in tree cavities, or in the case of domesticated bees, in a proper bee box. Workers tend the queen and larvae, and, unlike most native bees, Honey Bees overwinter in their nest.

Habitat: Roadsides, gardens, meadows, lawns and open woodlands. Almost anywhere flowers are present honeybees can be found. This species, although non-native, (brought over by settlers in the 1600's), have a key role in the pollination of crops such as apple trees which bloom before other colonies have established and workers are present. Honeybees start the year with an established colony instead of a single queen. Pesticides seem to be having the greatest affect on current honeybee populations, along with many other pollinators. Sometimes, masses of honeybees will form into a hanging "ball" (see picture below) in a tree when a queen leaves a large hive and takes workers to find a new site.

Diet: Adults eat nectar and honey, while larvae eat pollen and honey. Workers transform nectar they collect into honey and store it in cells made of a wax-like substance. These bees visit a vast variety of flowers, trees, and shrubs to collect nectar.

Defenses: The colonies main defense is numbers coupled with their ability to sting. Unlike many bees and wasps, these bees die after one sting. The stinger is left in the body of the attacker.